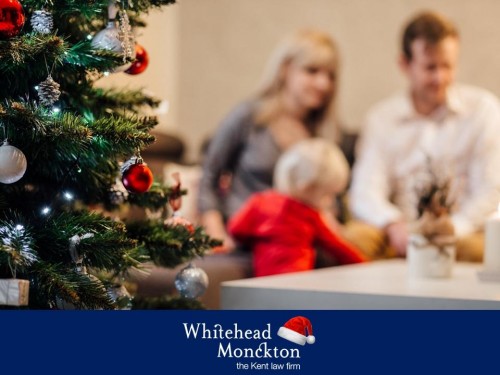 Christmas for many is considered to be the best and happiest time of the year. It’s a time when families and friends come together to enjoy lots of good food and drink, games, carols, laughs and of course a full festive calendar of football fixtures running throughout the Christmas period.

Despite the jubilation for many, for others, the season bears a gloomier persona. For individuals in broken relationships considering a divorce/formal separation or for those who have already divorced/separated and are spending their first Christmas apart, the Christmas period can be a very stressful time indeed.

Statistics on divorce tend to reveal a spike in the number of petitions started in or shortly after the Christmas period. Between Christmas Eve 2018 and New Year’s Day 2019, 455 online divorce petitions were submitted to HM Courts and Tribunals Service with 13 people filing for divorce on Christmas Day itself!

For those who consider their relationships to be beyond repair or are approaching their first Christmas apart from their former spouse/partner, here are a few considerations to bear in mind for the festive season.

In line with how the courts deal with Children Act applications in general, make sure that the welfare (and with Christmas, happiness) of any children is your paramount consideration. The Children’s enjoyment of what is a magical time should not be a further casualty in the cross fire of ill feelings shared between current or former spouses/partners.

In terms of arrangements for contact with the children, in the absence of a court order stipulating the contact timetable you will need to reach agreement with your former spouse/partner making sure this is achieved in good time for the start of the Christmas period and preferably in writing. Despite this usually being a topic where parties disagree, you should maintain a willingness to compromise, allowing for arrangements to be as child friendly and as fair on each parent as possible. It may be worth considering whether it best to alternate days (Christmas Day with one parent and Boxing Day with the other) to limit disruption and allow the children two Christmas Day’s instead of one or alternatively, splitting Christmas Day in two; with one parent having the children in the morning and the other in the afternoon.

If you simply cannot agree arrangements with your former spouse/partner, it would be worth speaking to a solicitor about facilitating an agreement or advising on the alternative resolution methods of mediation or collaboration, to help to keep the matter out of court. The last thing anyone wants before Christmas is a fractious and expensive court battle.

It goes without saying that alcohol should at all times be consumed in moderation. For couples on the brink of divorce it is also worth bearing in mind that divorce petitions based on behaviour can and often do allude to a party’s unreasonable behaviour when intoxicated.

Naturally the decision to divorce/separate is never an easy one and parties to a relationship often let their true feelings fester for some time before speaking to their partners. Be wary of the time and place to have meaningful talks with your spouse/partner. Undertaking said talks whilst under the influence of alcohol is likely to be unhealthy for the relationship and could have the ultimate effect of causing unhealable rifts between the two of you. It is always best to operate with a clear mind.

Concerns over the spending habits of a party can lead to the irretrievable break down of a couple’s relationship. With Christmas being a particularly expensive time of year it would be sensible to agree with your current/former spouse a spending budget, both to limit and monitor spending.

For former spouses, should the parties find themselves in differing financial positions, in the interests of harmony and cohesion it would be sensible to make sure that the gifts purchased for any shared children are of similar value and amount. A clear disparity in either the amount of gifts purchased or luxury of those gifts will only serve to heighten discontent amongst parties.

As Christmas is fast approaching whatever your current situation, if you haven’t already started thinking about your Christmas plans now is the time to do so.

Should you need guidance or advice on couple separation, divorce or child arrangements please do not hesitate to get in touch with a member of the Whitehead Monckton family team who shall endeavour to assist you wherever possible.

Otherwise have a very Merry Christmas and best wishes for 2020!