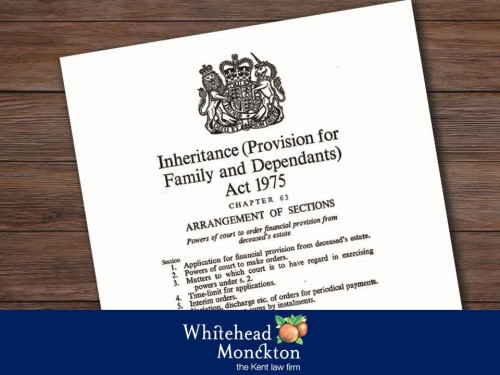 The Inheritance (Provision for Family and Dependants) Act 1975 (“the Inheritance Act”) has long been the legal mechanism by which certain people can make claims for reasonable financial provision, should the Will of a deceased individual not sufficiently provide for them. Should a claim be pursued, the Court then has judicial discretion to determine the outcome.

Time limits under the Inheritance Act

The parameters of the Inheritance Act are strict in a number of areas, not least with regard to the time limits by which a person is able to bring a claim under the Act.

Under S.4 Inheritance Act, claims against the estate cannot be made after the end of the period of six months from the date on which representation (e.g. grant of probate) is first taken out – the “statutory period”.

The statutory period begins to run from the date specified on the grant of representation and expires 6 months therefrom, at which point an individual will be unable to pursue a claim under the Inheritance Act.

What then can be done for individuals seeking financial provision after this time?

Long disputed has been the role of standstill agreements in the area of contested wills.

A standstill agreement is essentially an agreement between two parties involved in litigation to extend or suspend a limitation period. They have become increasingly more commonplace in civil cases as they give parties more time to work through pre-action requirements before a claim is issued.

Despite the fact that the popularity of these agreements has increased in recent years, you may immediately begin to see the conflict with S.4 Inheritance Act. Should a standstill agreement be granted to a claimant seeking an order under the Inheritance Act, the agreement may have the effect of extending the statutory period perhaps far in excess of the 6 months.

The recent High Court judgment of Cowan v Foreman & Ors [2019] EWHC 349 (Fam) has somewhat reengaged debate surrounding the reliance that can be placed on standstill agreements.

The case involved the near £16 million estate of Mr Michael Cowan, who died in April 2016. Probate was granted in December 2016 meaning the statutory period expired in June 2017.

Mr Cohen’s Will made provision by way of two different trusts, a business property trust whereby his wife Mrs Mary Cohen was named as one amongst other beneficiaries and a residuary trust in which Mrs Cohen had a revocable life interest.

However, Mrs Cohen argued that the lack of provision granted to her left her vulnerable to the will of the trustees. She brought a claim on her husband’s estate in November 2018, some 17 months after the expiry of the statutory period under the Inheritance Act. Shortly before, in January 2018, her solicitors had secured a standstill agreement.

Mrs Cohen argued that she was unaware of the statutory period for applications and asked the judge to apply his discretion to her claim.

The Court refused permission for Mrs Cohen to claim against the estate of her late husband. Presiding judge Mr Justice Mostyn launched a somewhat scathing attack on the applicability and reliance that should be placed upon standstill agreements.

Despite Mrs Cohen’s lawyers suggestion that standstill agreements are now common practice, the Judge insisted it was for the Court to decide what constitutes an acceptable time period in which to bring a claim under the Inheritance Act:

“If the parties want to agree a moratorium for the purposes of negotiations, then the claim should be issued in time and then the court invited to stay the proceedings while the negotiations are pursued. Otherwise it is, as I remarked in the argument, simply to cock a snook at the clear parliamentary intention”.

Further, the Judge suggested that in no future case should any moratorium agreed privately between parties should count as “stopping the clock” on the accrual of a delay, as this would help to avoid any unnecessary undue stress and expense to the litigation process.

The judgment and guidance of the Court was clear, in that the practice of standstill agreements should cease immediately.

For certainty, the best practice must be to bring a claim within the statutory period afforded by the Inheritance Act. Should any potential claim fall outside of the statutory period or be at the mercy of a standstill agreement then there is a risk that the claim will be out of time and be dismissed.