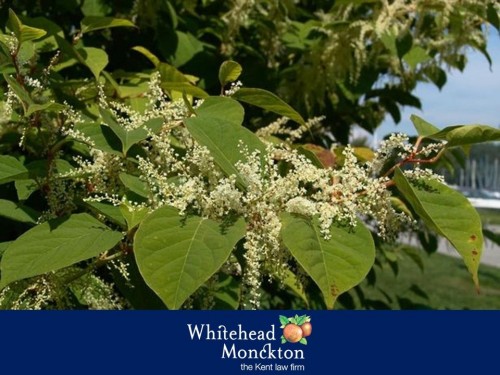 Springtime is traditionally the busiest time for the property market, but with a knotty problem affecting more homes than ever, it’s worth doing some horticultural homework before you start, whether you’re buying or selling.

Japanese knotweed is a highly invasive, aggressive and destructive plant, able to grow as high as four metres in just a few months and with roots that can spread seven metres.  It’s non-native with no natural predators, and is able to cause significant structural damage, growing through asphalt and other hard surfaces, often compromising building structures.   Getting rid of it is a costly and time-consuming business, involving specialist waste disposal, because simply digging up the roots is not enough to kill it.

You can be fined up to £5,000 or sent to prison for two years if you allow contaminated soil or plant material from Japanese knotweed to spread into the wild, and now a landmark court ruling has found that a landowner is responsible if they do not prevent the plant from spreading from their land to adjoining properties.

The case involved a group of homeowners in South Wales, who took action against Network Rail after Japanese knotweed grew into their garden from adjoining railway sidings.  The knotweed had been there for at least 50 years and had been actively treated since 2008, to ensure visibility for trains on the line.  In weighing up the claims of the homeowners, the judgement considered the extent of nuisance suffered, and found in their favour, saying that the presence of Japanese knotweed was enough, without any physical damage, as it had the potential to seriously affect the market value of a property.

Many mortgage lenders restrict their lending on properties that are affected and homeowners may have difficulty in selling, or find the value of property reduced by as much as 50%.

There have been few previous rulings involving Japanese knotweed infestations, and the outcome is likely to put extra pressure on property owners to control the plant, and have a significant impact on larger land owners and those responsible for tracts of public land.

Conveyancing expert Carole Cooper of Whitehead Monckton town solicitors commented:  “If you’re not a skilled gardener, it’s worth getting to grips with the Japanese knotweed identification sheet.  If you can see it growing on your property, then take steps to eradicate it.  If it’s growing on neighbouring properties, speak with your neighbours, and if they don’t tackle the problem then it’s worth considering action.

“If you are successful with a nuisance claim, you can push for neighbours to undertake a five-year eradication programme and ask for a guarantee from the specialist company involved, as well as seeking compensation, if there is evidence it has travelled through your boundaries.”

She added:  “Taking action to protect what is probably your biggest asset is a simple but sensible option, whether you’re buying, selling or staying put.  These days, when you sell a property, you will be asked whether Japanese knotweed has been found on the property and the reply will be included in the comprehensive pack of buyer’s information that lawyers compile during the conveyancing process.”