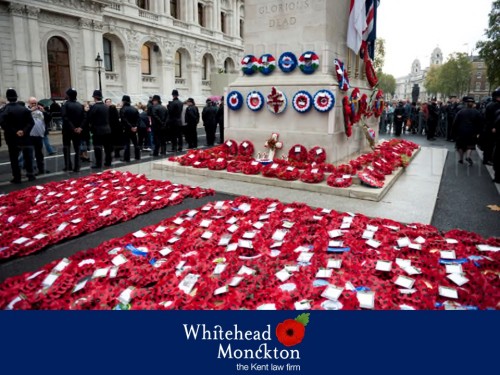 We will REMEMBER them!

This coming Sunday marks the centenary of the end of the First World War and the country will fall silent in honouring those men and women who have made the ultimate sacrifice in securing and defending our freedoms in conflicts that have scarred our nation’s history over the past 100 years.

We will REMEMBER them.

Remembrance Sunday – this always falls on the second Sunday in November and, by chance, this year it falls on the same day as Armistice Day, which is held on 11 November every year and commemorates the signing of the armistice between the Allies and Germany on that day in 1918.

Edward George Honey – the Australian journalist is originally thought to have proposed the idea of a two-minute silence in a letter published in the London Evening News in May 1919.

McCrae – Canadian doctor Lieutenant Colonel John McCrae is thought to have been inspired by the sight of poppies growing in battle-scarred fields to write his famous poem ‘In Flanders Fields’.

Evacuation – the armistice forced the Germans to evacuate invaded countries and territories within two weeks.

Blood Swept Lands and Seas of Red – this was a public art installation created in the moat of the Tower of London between July 2014 and November 2014, commemorating the centenary of the outbreak of World War I.

Events – the Queen will attend a Festival of Remembrance at The Royal Albert Hall on 10 November. It is anticipated that she will attend a special service at Westminster Abbey alongside the President of Germany Franz-Walter Steinmeier as well as various events at the Cenotaph on 11 November. The families of World War I veterans will be allowed to march past the Cenotaph to commemorate the sacrifice of their loved ones and there will be a special service of remembrance outdoors at the Armed Forces Memorial on Armistice Day. A shaft of sunlight bisecting the monument will hit the central bronze at 11am, marking the hour the armistice became effective.

Railway carriage – the armistice was signed in French military commander Ferdinand Foch’s railway carriage in the remote Forest of Compiègne, north of Paris, at 5am on 11 November 1918 and came into force 6 hours later at 11am.