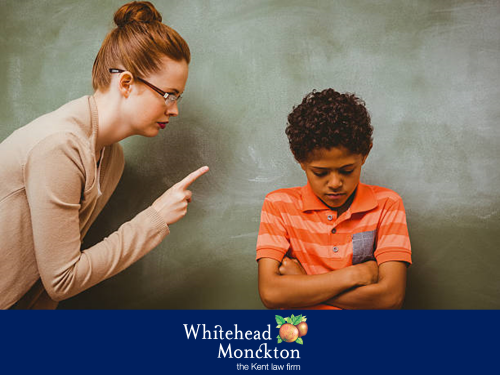 Pupil exclusions by schools have been hitting the headlines in the run up to the start of the new academic year and parents are being encouraged to find out where they stand if their children are the focus of disciplinary action at school.

Figures published recently by the Department for Education show that the proportion of pupils permanently excluded from school has risen for the third year in a row, and the publishing of the latest GCSE results coincided with accusations that schools have been timing so-called ‘informal’ exclusions to improve their league table performance.  Alongside, a landmark human rights case has ruled that the exclusion of an autistic pupil on the grounds of challenging behaviour is unlawful.

The case of the autistic student, known as “L” was heard by the Upper Tribunal, the court that deals with appeals against school exclusions.  The judge said that a regulation under the Equality Act which allowed schools to exclude pupils for aggression was incompatible with human rights legislation, as it discriminated against pupils with autism and similar conditions.

Although schools must make reasonable adjustments to ensure disabled pupils get the right support, until this ruling they have been able to exclude autistic pupils for acting aggressively, without taking any steps to support the pupil, even if the behaviour was directly related to their autism.

The Department of Education figures show that pupils with special educational needs account for around half of all permanent exclusions, with ‘physical assault against an adult’ given as the most common reason. In future, where such behaviour is related to a pupil’s condition, schools will have to demonstrate that such a decision is proportionate.

This ruling means that pupils with autism, ADHD and other similar conditions, where aggressive behaviour is a likely outcome, will have greater protection from school exclusion. The judgement does not mean that schools will be stopped from excluding such children on the grounds of behaviour, but in future they will have to demonstrate the steps they have taken to support the child, and how such an exclusion is proportionate in the circumstances.

For any parent who is dealing with an exclusion, whether or not their child has a recognised special educational need, it’s important to know where they stand and how they can question a school’s decision.

Any exclusion – temporary or permanent - can be challenged, and parents have the right to make representation to the school’s governing body, which has the power to over-rule a headteacher’s decision. Beyond that, parents can ask for an independent review, which can be done without cost to them, or they can contact the exclusions team at their local authority.  For children with special needs, there is a dedicated tribunal to deal with cases.

And if an exclusion is made on an ‘informal’ or ‘unofficial’ basis - what is sometimes known as ‘off-rolling’ - that is unlawful and the parents need to contest it with the school.  This is the practice that has been highlighted in recent news reports.

Whatever the situation, if it’s hard to get answers, or you don’t know what to make of the answers, then it’s worth getting professional advice as early as possible.

Exclusions in England are governed by rules set out in the Education Act 2002 and can be made on disciplinary grounds alone.  The rules also apply to children above or below compulsory school age, such as nursery or sixth form.  Pupils may be excluded for fixed periods of up to 45 school days in a single academic year or permanently removed from the school roll.  Any decision on permanent exclusion should be taken only “in response to a serious breach or persistent breaches of the school’s behaviour policy; and where allowing the pupil to remain in school would seriously harm the education or welfare of the pupil or others in the school”

If you need assistance in this area please contact Graham Jones here.