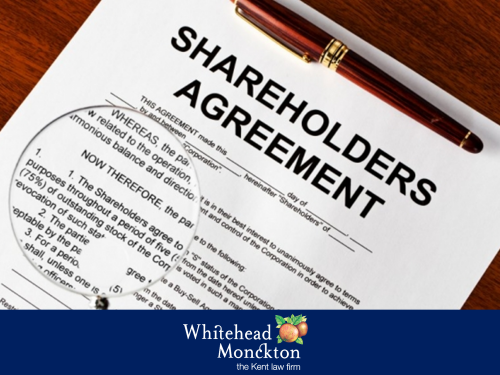 I recently assisted our Dispute Resolution Department with a dispute. The dispute was between two shareholders who owned 50% of the shares in the company each and were also directors. They were no longer able to work together.  One had decided to step back from the business.  There was no Shareholders Agreement in place.

As there was no Shareholders Agreement in place, there is a very limited range of options for them to be able to settle their dispute under the law.  The Companies Act 2006 provides few routes for shareholders to be able to extricate themselves from such a situation, the main one being the “just and equitable” winding up of the company.  As the company was financially successful, winding it up was an option of last resort.  Consequently, the parties had to negotiate a settlement but it was a long and painful process which incurred considerable legal and other professional fees on both sides.

Lesson to be learned

Even though shareholders may not feel that they will have a dispute with the other shareholders, they cannot predict the future.  In the event of a dispute they need to be able to sell their shares at a sensible price and to get out of the business.  Shareholder Agreements can be a wide ranging document to cover the main foreseeable problems between directors and shareholders.  Prevention is better than cure.