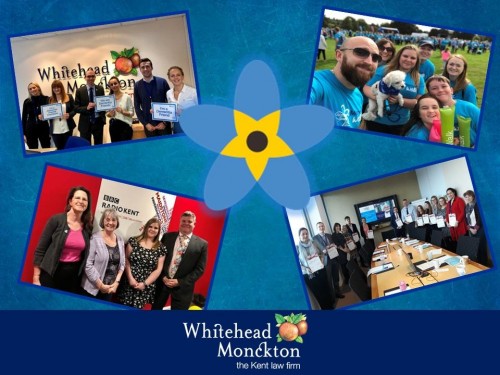 We are pleased to announce that Whitehead Monckton have been shortlisted for the Dementia Friendly Kent awards in the ‘Dementia Friendly Organisation/Company with 50 or more staff’ category.

Whitehead Monckton obtained the Working to be Dementia Friendly recognition symbol in 2017/18, and have retained the symbol for this year. As part of the firm’s dementia-friendly commitments, the firm uses positive language in all promotional materials, and co-leads and Dementia Friends Champions Bekka Fuszard and Amy Turner-Ives together with other Champions at the firm have been running regular Dementia Friends Information Sessions for staff to attend. At the time of this article, across the three Kent offices, 75% of staff are Friends, with 85% in the Maidstone office. Bekka and Amy also deliver Dementia Friends Information Sessions out in the community.  Recent public sessions include schools, community groups, Kent Fire and Rescue Service and the Police Cadets.

Whitehead Monckton have also been involved in activities for Dementia Action Week such as hosting a public Dementia Friends Information Session, manning an information stall at Fremlin Walk and collecting forget me nots for yarn bombing. Bekka and Amy also volunteered at the Goodman Centre during Dementia Action Week; singing and dancing with their clients and plan to visit the centre again soon.

The firm actively supports the Building a Dementia Friendly Maidstone (‘BDFM’) constitution – a community group with the aim of increasing awareness of dementia and encouraging support of local businesses, clubs and organisations.  Relevant information and activities for the community to get involved in (such as Age UK Maidstone’s Memory Matters Café, where members from the firm regularly attend) are posted on the BDFM social media pages, which Bekka and Amy manage on behalf of the group.

Whilst being very much a team in relation to the firm’s dementia-friendly commitments, individuals within the firm have also undertaken separate steps to support the firm’s overall achievements. To give a few examples, Bekka appeared on BBC Radio Kent’s ‘On the air with Graham Jones’ show regarding Dementia Friends in October 2018 and again in May 2019 to promote Dementia Action Week and the recognition symbol. Amy participated in a Virtual Dementia Tour and is part way through a course regarding the principles of dementia care to further her understanding. Hannah Durston from the firm’s Canterbury office is involved with the East Kent Forget Me Nots group and was a speaker at their Education Day in June.  Bekka, Amy and Daniel Brent from Raymond James have also spoken at a recent Alzheimer’s Research UK event on planning for the future, advising those affected by dementia on getting their legal affairs in order.

Staff have also worn the KCC Age Suit to further increase their understanding, and have also fundraised for dementia charities hosting a Cupcake Day in June 2019, and taking part in both the 2018 and 2019 Memory Walks.

The firm’s Tax and Estate Planning team have undertaken specialist training provided by the Alzheimer’s Society regarding interacting with people living by dementia so they are empowered to greater assist them with their legal affairs.  Following this, the team are part of the Alzheimer’s Society Wills to Remember scheme.  Furthermore, they are taking active steps to provide a dementia-friendly meeting room.

The awards ceremony is to take place at the Kent Event Centre on Friday 11 October 2019.