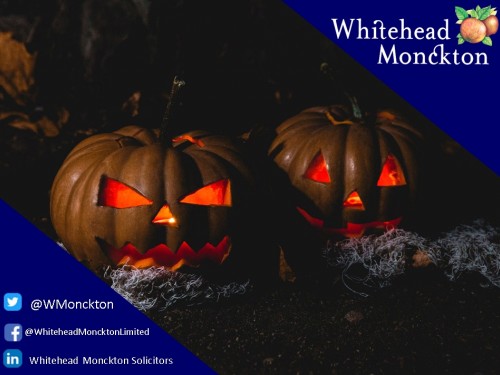 Halloween & The Day of The Dead

The origins of Halloween in Britain can be traced back to Pagan times when it was believed by the Celts that on the night of 31st October ghosts of their dead would revisit the mortal world.  Bonfires were lit in each village in order to ward off any evil spirits that may also be at large.  Following the arrival of Christianity came the Western Christian triduum of Allhallowtide: All Saints/Hallows' Eve, All Saints/Hallows' Day, and All Souls' Day.  All Hallows’ Eve, the day when the spirit world can contact the physical world, became known as Halloween. To this day, many of Britain’s Halloween traditions continue to focus on warding off any evil spirits.

Whilst we are celebrating Halloween, the Día de Muertos (‘Day of the Dead’) holiday is celebrated in Mexico; family and friends gather to pray for and remember those who have died.  Although they mourn, they celebrate death with humour and joy and it is customary for the people of Mexico to embrace death as a part of life.  Conversation about the dead is encouraged, however much time has passed.

Here in Britain, death discussions are still seen as taboo for many. Grief and mourning in this country are often treated as very private things, and many people struggle to find the right words. Instead of using words like death and dying, we often use avoidant language such as passed away and lost.

A study in 2015 by Dying Matters found that nearly three-quarters believe their fellow Britons are uncomfortable discussing dying and bereavement.  Only 35% of those surveyed said they had made a will and 27% had talked about their wishes for a funeral. A mere 7% had discussed what sort of care they might want if they are unable to make their own decisions, while only 18% said they had spoken to a family member about the way they might want to end their life.

There are encouraging signs that talking about dying is becoming more acceptable and more people are making Wills and Lasting Powers of Attorney to plan for incapacity and death.  However, for many it is still an uncomfortable topic and too many people are continuing to avoid facing up to their own mortality and are not putting plans in place. We still have a lot to learn from other cultures to normalise conversations around death, dying and bereavement.

Dr Kathryn Mannix says that many families will avoid talking about death because “[t]hey are desperate not to cause upset [..] they are acting from a good place, but it’s tragic because it stops people having really important conversations.”1  Talking about dying and planning ahead may not be easy, but it can help us to make the most of life and spare our loved ones from making difficult decisions on our behalf or dealing with the fallout if we have not got our affairs in order.

Whilst helping you put the relevant legal documentation, such as Wills and Lasting Powers of Attorney, in place we can help encourage and facilitate those difficult discussions around death with the whole family.  We understand the fear people feel but can help you explore what a good death looks like for you and help those wishes be fulfilled.  For many people a good death means being with family and friends, being cared for and able to die in the place of their choice and being involved in decisions about their care, or if they are not able to for family and friends to be involved.

1 Watch Dr Mannix’s powerful short BBC idea video on dying is not as bad as you think and why we need to talk more about death on her Twitter page: https://twitter.com/drkathrynmannix